Visit Egypt Egypt had been at the top of my list since seventh grade history class. To me, the Cradle of Civilization was a graduate-level travel locale, the grandest stop on a Grand Tour. So in January 2018, when I heard tourists were going back after a lull in political unrest, I booked a flight for the spring. 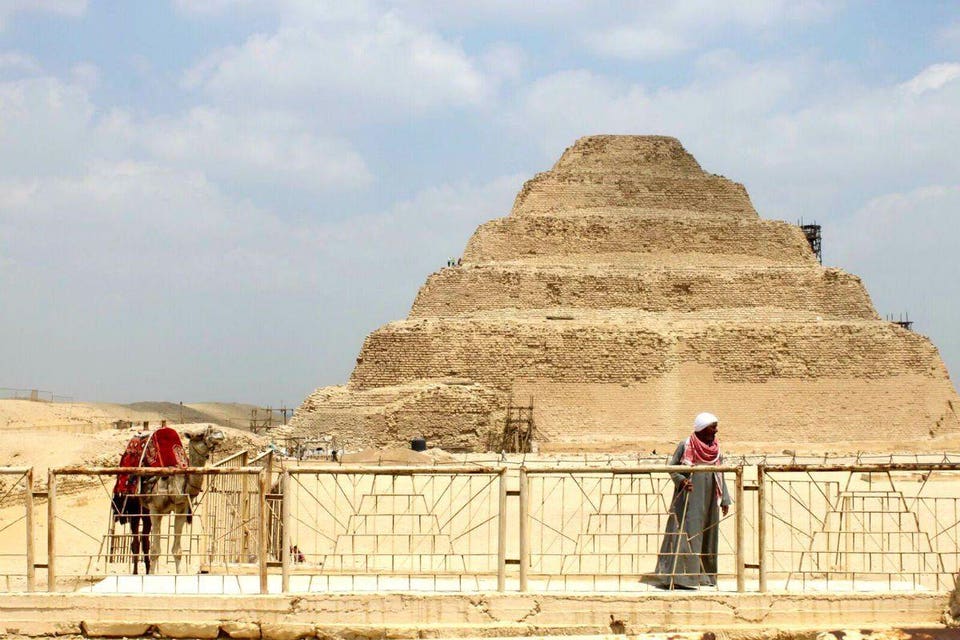 The Pyramid of Djoser in the Saqqara necropolis.

I feared my expectations were too high (seventeen years of build-up can do that). But on my flight to Cairo in April, when the pyramids came into view, I gasped and my stomach did a flip. The magnitude of the site is hard to comprehend and harder to describe. It was all tears and tingling — like my body understood the deep history in a way that my brain could not.

Aside from the Great Sphinx and Great Pyramid of Giza, there’s also the city of the living. Cairo is a thrilling mess of a city, with raucous traffic, buildings the color of desert dust, and 22 million passionate residents. These people led a revolution in 2011 that toppled a regime — and halted tourism. Today, the country is stable and ready to welcome travelers back.

To me, the Cradle of Civilization was a graduate-level travel locale, the grandest stop on a Grand Tour. 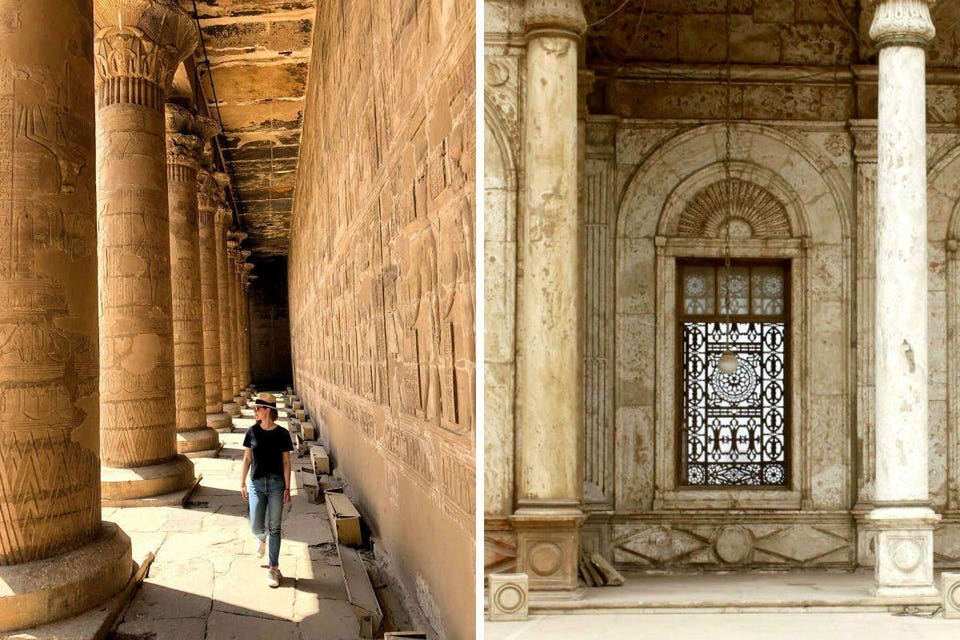 Inside the Mosque of Muhammad Ali at the Citadel.

Tourism in Egypt hit an all-time high in 2010 at 14.7 million visitors (for perspective, Paris had 8.2 million tourists in the same year.) Then, in the throes of the Arab Spring in January 2011, the Egyptian people gathered to demand that President Hosni Mubarak step down after three decades in power. After eighteen days of demonstrations in Tahrir Square, Mubarak resigned.

The military took control, until a popular vote elected Mohamed Morsi from the conservative Muslim Brotherhood as president. A second wave of protests ousted Morsi in 2013, and Abdel Fattah el-Sisi was elected president. He has been in power since, and the country has been peaceful.

The tourism industry took another hit in 2015, when a chartered Russian plane crashed in the Sinai Peninsula in a purported terrorist attack. The following year, tourism fell to its lowest number in years: 4.8 million.

But now, three years later, the political situation has stabilized, and visitors are returning to Egypt. There were 8.3 million tourists in 2017, and the 2018 numbers look even more promising.

This is just one couple’s experience, but my husband and I felt welcome and safe throughout our time in Egypt. There is a large security presence and checkpoints located outside all sites and hotels. While this amount of security may sound nerve-wracking, it’s quite the opposite. When you are traveling with a good guide, you hardly notice all the procedures in place to keep you safe.

We were in the capable hands of Egitalloyd, a family-owned operator that has been crafting tailor-made itineraries for Americans since the 1950s. Their roster of guides include the country’s top Egyptologists, and their influence runs deep: We even received a few room upgrades (another reason to go now and beat the crowds).

According to Hisham El Sebai, the managing director of Egitalloyd, “Security is number one now in Egypt. All tourist sites are fully secured inside and out.” As for destinations to avoid, El Sebai doesn’t send his guests to the Western Desert and North Sinai. “All other destinations are safe and secured.” 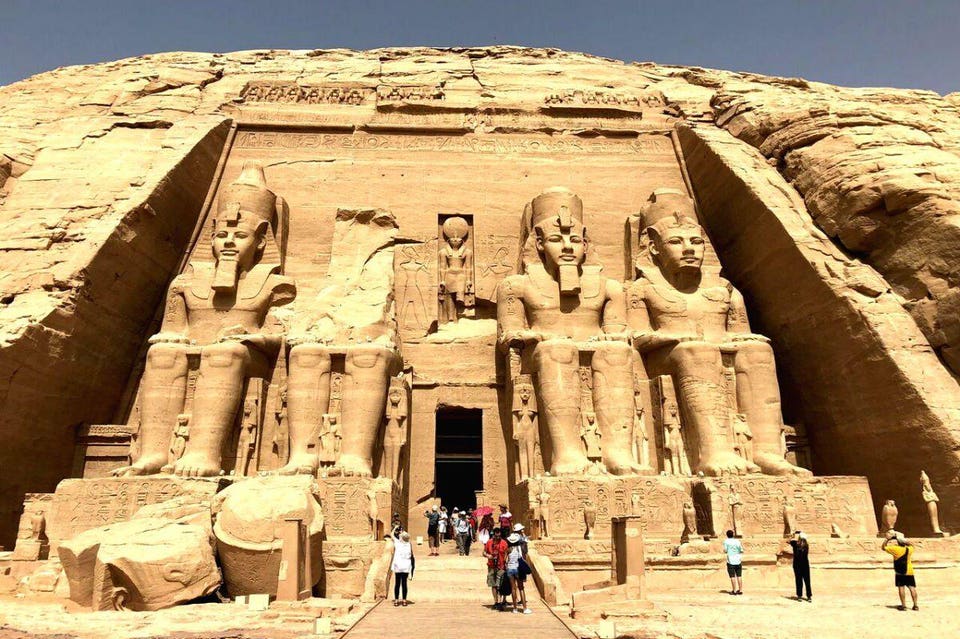 The Great Temple at Abu Simbel.

You Can Still Avoid the Crowds

On the first day with our guide, we woke up early to see the Great Sphinx and Pyramids of Giza. This is where we encountered the most tourists. But even so, we were able to explore freely and take photos without busloads in the background. “Sites are not crowded like in 2009 and 2010,” El Sebai says, “so you can enjoy the treasures of the country in peace.”

The most special moments were the intimate ones. Stepping into a smoky Coptic church during a service, our guide translating the prayer into my ear. Sailing along the Nile in a small sailboat called a felucca, past ancient cartouchesetched into the rocks. Admiring the carvings in a corridor of the Great Temple at Abu Simbel, only to step out and find we were the only ones inside. Seeing these sites without a crowd made the experience infinitely more special.

In a move towards greater economic stability, the government allowed the currency to float to market rates in November 2017. In doing so, the Egyptian pound lost more than half its value in the short term. As a result, it’s a very affordable time to visit, with five-star hotel rooms costing as little as $200 per night.

Hotels Are Getting a Refresh

Ever confident in Egypt’s ability to woo travelers back, hotels took advantage of the dip in tourism to refresh and renovate, which means they’re looking better than ever.

If you’re anything like me, when you first arrive in Egypt, you’ll be geeking out over a view of the Nile. The best place to soak up the scenery is from a Nile-view room at the Four Seasons Cairo at Nile Plaza. Rooms have a classic Four Seasons feel and the best balconies in Cairo. I liked to wake up early to sit outside with my coffee and watch the boats pass. You can even see the pyramids in the distance if the sky is clear. There’s a buzzy scene in the lobby and restaurants in the evenings, which was nice when we wanted to stay local after a long day of touring. 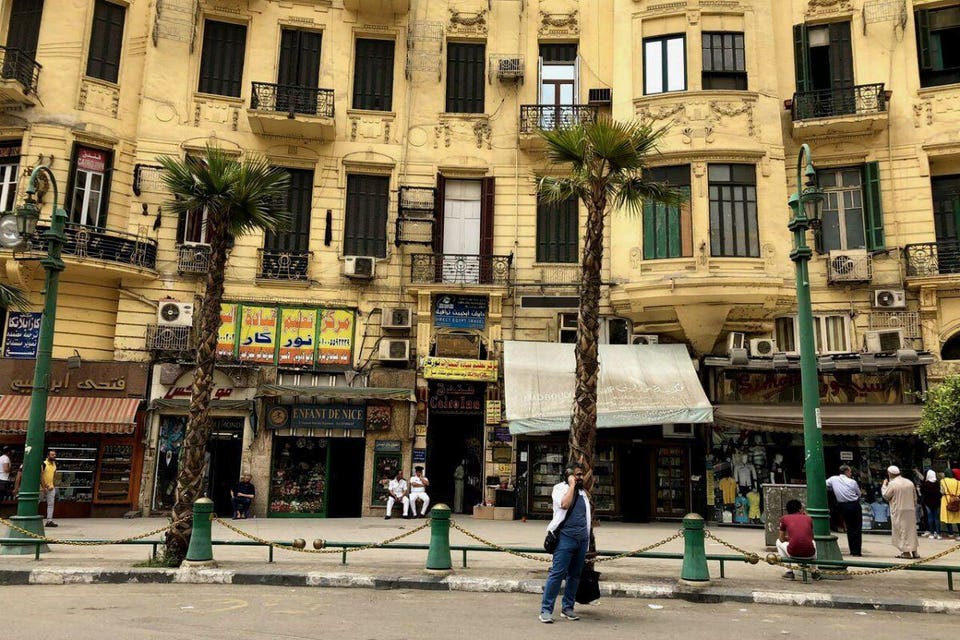 The downtown area of cosmopolitan Cairo

A newer choice with a view is Nile Ritz-Carlton, which opened in 2015 in the former Nile Hilton. Ritz-Carlton took over the iconic property in 2009, but its close proximity to Tahrir Square put the project on hold. Today the location is its greatest asset. The hotel is just steps away from the Egyptian Museum. The wide windows offer outstanding views of the Nile (there are no balconies, though). The rooms are contemporary with cool retro touches, and a few details were left in homage to the old Hilton. There is an Olympic-size swimming pool and a lively terrace restaurant that offers live music in sight of the Egyptian Museum.

Cairo is in the midst of building a second museum, the billion-dollar Grand Egyptian Museum. Slated to open in late 2018, the museum is expected to be the largest archaeological museum in the world. Not far from the Four Seasons Cairo at the First Residence, it will have the freshest rooms in the city. The recently debuted suites are bright and plush with baroque details that lend a palatial touch. The location on the western side of the Nile is ideal for visiting the sites in Giza, but I also liked the hotel as an ending point after a river cruise. After a few days on the river, you won’t be looking for epic Nile views and a bustling lobby scene. Instead, the beautiful bedrooms and intimate boutique feel make an ideal setting for reflection.

The hottest hotel news is the St. Regis Cairo. Set to open in 2018, I was lucky enough to get a sneak peek. The 39-story hotel is unique, with grand open spaces and a true resort feel. The dedication to craftsmanship and detail is visible in the mother-of-pearl inlays in the corridors and the pop of exuberant wallpaper inside the wardrobes. The rooms are stylish and serene, with a pretty color palette of pinks, whites, and sage green, with picture windows and elegant mosaic walls in the bathrooms. Also on offer: butler service for every guest, a fabulous spa, and eight bars and restaurants, including a classic St. Regis Bar.

Let’s not forget the old-school places for those interested in living a 19th-century explorer fantasy. We flew south to Aswan, the starting point of our Nile cruise to Luxor. Aswan is the gateway to the temples of Abu Simbel, the astonishing monuments to King Ramses II and his wife Nefertari. It’s a three-hour drive from Aswan, or you can skip the car time and book a round-trip flight.

Aswan’s storied grande dame hotel is worth a trip alone. Sofitel Legend Old Cataract Aswan is where Agatha Christie wrote Death on the Nile and Winston Churchill celebrated the inauguration of the Aswan Dam in 1902. The hotel has my favorite view in Egypt, overlooking an ancient settlement on Elephantine Island, at the old border between Egypt and Nubia. You can watch feluccas sail past, the traditional sailboats with big, billowing sails, or sail on one yourself. 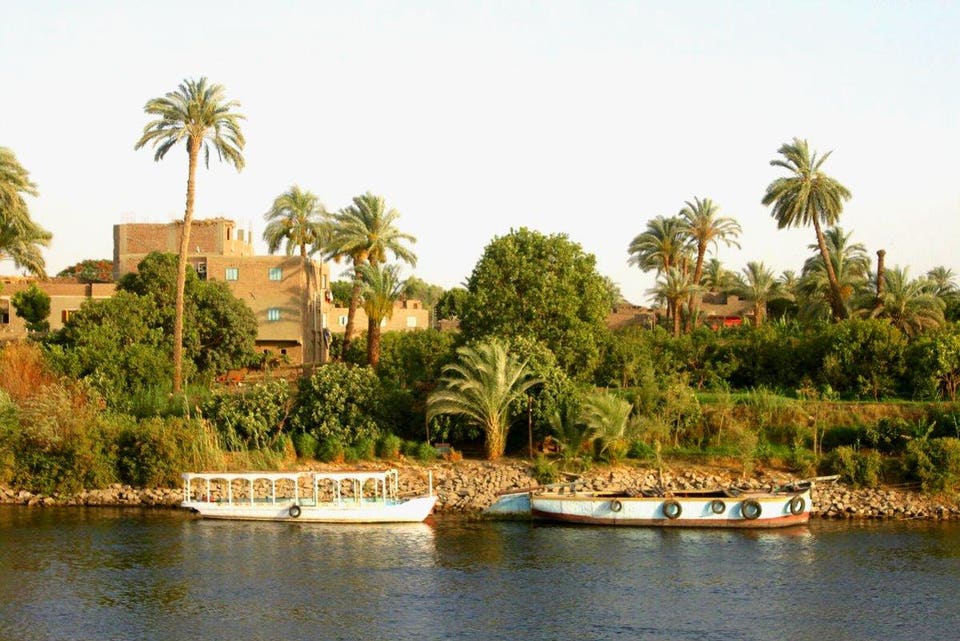 Cruise down the Nile on the Oberoi Philae for great views

But we were in Aswan to board a bigger boat. A cruise is not the only way to see the sights along the Nile, though it is certainly enjoyable. Especially if you’re sailing on The Oberoi Philae. This fine ship, fully revamped in 2015, has a contemporary sheen, 22 luxurious cabins and suites, and an excellent restaurant you won’t tire of. The cabins are plush and spacious, with large windows you can throw open to feel the breeze. The luxury suites come with large private terraces with lounge chairs and a Jacuzzi tub. If you’re looking for a time to splurge, this is it: Watching the scenery pass from your private terrace is a pretty spectacular way to get from place to place.

You can book a four- or six-night itinerary, but four nights is enough to see the sights. You’ll tour the highlights with a guide: Philae Temple, Edfu, Luxor Temple, Karnak, and more. On the final day of touring, you’ll see the Valley of the Kings and step inside the famous tomb of King Tutankhamun. All the treasures found in the tomb have been relocated, most to the Egypt Museum in Cairo, except for the greatest treasure of all: King Tut’s mummy, which rests in the tomb. While Tut’s tomb is the most famous, some are far more extravagant, including those of Ramses II and Ramses VI, masterpieces painted in more colors than I ever imagined.

If you have time to explore Luxor at the end of your cruise, take it. The cruise doesn’t visit the excellent Luxor Museum or the Valley of the Queens, and it doesn’t include hot air ballooning over the valley, which some travelers add on. Hilton Luxor is the best resort option, with a large Nile-view pool and a sprawling spa.

A more classic option is the historic Sofitel Winter Palace, where Howard Carter announced the discovery of King Tut’s Tomb in 1922. The rooms show their age, but having a cocktail in the storied gardens can’t be beat. Artsy types should choose the Al Moudira Hotel, an eclectic boutique hotel owned by a Beiruti artist. It’s a bit farther away but offers easy access to the Valley of the Kings and an excellent pool at day’s end.